Are you liable for your spouse’s fraud?

Ascendion Law’s Graeme Hooper recently won a victory in the Court of Appeal which clarifies the law on when you may be required to repay portions of your spouse's theft or fraud.

Ms. Moscipan had defrauded her employer more than $500,000, taken by issuing herself small cheques from an account she had signing authority over. However, before the case could proceed against her, she passed away. The employer proceeded, naming her estate and her husband, Mr. Moscipan, who had been a stay-at-home parent. The employer sought that Mr. Moscipan be required to repay the entire amount of the fraud, on the basis that his family had received the benefits of it. However, the evidence was that Mr. Moscipan had personally led a frugal life, and had not participated in or known of the fraud. So how much of the stolen amounts would he have to repay? 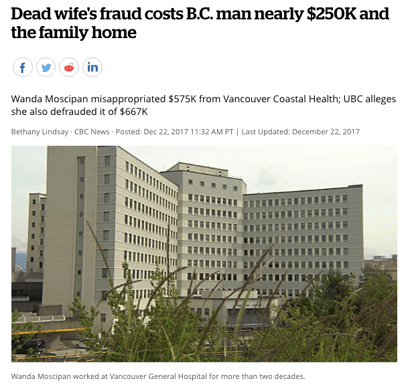 At trial, the trial judge held that Mr. Moscipan had to repay half of the amounts spent on the family, even if he did not personally benefit from those amounts, resulting in Mr. Moscipan being personally responsible to repay $246,000.

On appeal, Ascendion Law’s Graeme Hooper acted for Mr. Moscipan, and urged the Court to reverse that finding on the basis that Mr. Moscipan had not personally received the $246,000 and therefore could not be required to repay it. The Court of Appeal agreed and reduced Mr. Moscipan’s liability to only the amount that could be directly traced to having been paid into his bank accounts over the years. The result was a reduction in Mr. Moscipan’s liability by more than $100,000.

This would be a good time to ask questions and perhaps seek legal advice regarding responsibility.